Gerry Adams and a 'wee dander' up the Falls

Last Thursday Gerry Adams posted on his Leargas blog and promised a great centenary parade on the Falls Road on Easter Sunday.  He said:

It will be a spectacular celebration of 1916 including hundreds of participants in period dress.  As in 1966 the parade will be led by an Irish Wolfhound.  People in period dress representing the leaders of the rising will led (sic) the rest of the parade and will be followed by a full flag bearing colour party in period dress.  Other participants will include former political prisoners, the GAA and representatives of the local clubs in west Belfast.  The families of our patriot dead will carry photographs of their loved ones.  And a large delegation from the American Labour Movement will also be joining us.

So how did it all match up to Gerry's promise of a 'spectacular celebration?  I decided to watch the youtube coverage of the event and see for myself.

I was surprised there were so few bands and so few local bands.  Large sections of the parade were simply made up of people straggling along as though they were out for an afternoon dander.  One woman had even brought her dog on a lead!

Now it did include an Irish wolfhound, as promised by Gerry,   I'll give him that, but it takes a lot more than a big dog to justify the term 'spectacular celebration', especially if the person with the dog can't manage to button his shirt properly.  That is definitely not a military look.

Some of the marchers, and I use the word 'march' very loosely, were in 'period dress' but it takes a lot more than that to justify the word 'spectacular'.

That brings us on to his promise of 'former political prisoners', of whom Sinn Fein has an abundance, and members of GAA clubs.  I presume that is the very same GAA that is 'reaching out' to be inclusive! 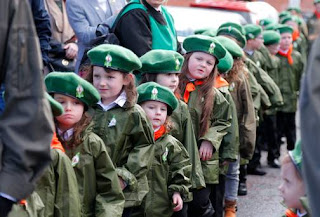 The inclusion of so many children, some in the ranks of the GAA clubs and some very small children in rather bizarre uniforms, was particularly disappointing.  It seems that another generation of children are being brought up in the republican ideology that idolises the 1916 rebels, the ideology that created the 'political prisoners' that Gerry promised.

Towards the end of the parade there was a group of Irish-American trade unionists but really that was it.  Oh, apart from some black taxis.

This was no spectacular celebration and all that Gerry Adams had to offer his followers after a century of struggle was a second or third rate 'dander' up the Falls Road.  He certainly didn't deliver a United Ireland by 2016 - as he promised - and he couldn't even manage to organise a  really good parade, never mind a 'spectacular celebration'.

Posted by Nelson McCausland MLA at 13:46