Holywood and the American Civil War 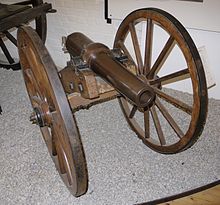 In Holywood, county Down, there is a fine house named Carnwood House in Victoria Road.  This magnificent house was built in 1855 and it has an interesting historical connection to the American Civil War, for it was once the home of Captain Theophilus Alexander Blakely.

The London Gazette (23 November 1860 & 26 February 1861) reported that Captain Theophilus Alexander Blakely, of Holywood, a captain in the Royal Artillery, had been granted a patent for 'the invention of an improved method of increasing the strength of steel and wrought iron'.

He was a British ordnance expert and from the 1850s through to the 1880s he designed a series of muzzle-loading cannon which were best known for their use by the Confederate States Army during the American Civil War.  During the Civil War his sympathy was with the Confederacy and he did much to assist the Southern states, who did not have enough modern artillery.  He sold finished guns to both the Confederate States Army and Navy and his knowledge of ordnance and his patents were extremely important.

We often think of associations with the Civil War in terms of the role of Scotch-Irish Americans and Irish-Americans but this is an almost forgotten association.

During the 1860s Captain Blakely spent much of his time in Holywood, where he had a house, but it seems that he had to leave Britain to escape the courts and went to Peru, where he lived in near poverty.  He died of yellow fever at Chorrillos in Peru on 4 May 1868, at the early age of forty-one.

There is a commemorative inscription to Blakely on his mother's grave: 'Mother of CAPTAIN BLAKELY Royal Artillery, Original Inventor of Improvements in Cannon and the Greatest Artillerist of the Age.'


Posted by Nelson McCausland MLA at 14:54