A veteran member of Sinn Finn has created a tweet depicting four member of the Ku Klux Klan in full KKK uniform above a photograph of a Belfast Orange parade at Carlisle Circus in North Belfast with the comment:  ‘Spot the difference.  Answers on a tweet please.’

The Orange brethren are members of the colour party of the County Grand Orange Lodge of Belfast.

The author of the tweet is veteran Sinn Fein member and businessman Dermot Kennedy, who is the prospective Sinn Fein election candidate in the forthcoming Assembly elections in the constituency of Strangford.  He has been a member of Sinn Fein for almost forty years and is an experienced politician as well as a businessman.

Dermot Kennedy has worked at the heart of Sinn Fein.  He was a college lecturer before going in to business but has also worked in the policy department of Sinn Fein.  So we know a little more about the sort of people employed by Sinn Fein. 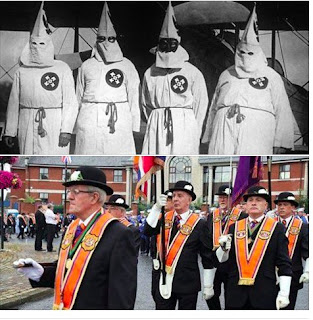 On this occasion his mask has slipped and we see the sectarianism and bigotry that permeate his party.

Dermot Kennedy is not the first prominent member of Sinn Fein to make such a remark.  In October 2000 Sinn Fein MLA Dr Dara O'Hagan compared the Orange Order to the KKK on the floor of the Assembly.

In his book Northern Ireland and the Divided World, Professor John McGarry, a political scientist, said that those Irish republicans who opposed Orange parades 'frequently refer to the Orange Order as akin to the Ke Klux Klan' so that is something that Dermot Kennedy will have heard many times in Sinn Fein gatherings.

Ruth Dudley Edwards has confirmed this.  She said: 'During anti-parade protests of the 1990s - which the IRA army council deliberately organised to foment community violence - republican propagandists ruthlessly demonised Orangemen, depicting them as the Klan with Orange sashes.'

So it's over now to the leadership of Sinn Fein. What do they make of Dermot Kennedy's KKK tweet and what are they going to do about it?

Dermot Kennedy has never been convicted of a terrorist related offence but he was mentioned in court in April and May 2010.  During the summer of 2004 his brother Kevin Kennedy had been forced to resign from a job with the Policing Board after failing a security check.  Kevin Kennedy, a former Roman Catholic priest, had worked as a civil servant for many years but had failed security vetting ‘because of historical and recent intelligence regarding his brother, Dermot Kennedy, which had been assessed and reliable and accurate information.’

Dermot Kennedy also appeared in court as a businessman and developer after demolishing a listed building in the Malone area of South Belfast.  For this offence he was fined a paltry £150.

Posted by Nelson McCausland MLA at 15:08