Labour Alternative and the Socialist Party.

In Northern Ireland People Before Profit is effectively a front for the Socialist Workers Party and now the Socialist Party, another brand of Trotskyism, has its 'front' organisation as well.

A report in The Socialist (April 2016), the paper of the Socialist Party, refers to the election of Jeremy Corbyn as leader of the Labour Party and then turns to the Northern Ireland Assembly:


In this context and in advance of the election the Socialist Party has helped to initiate a new organisation: Cross-Community Labour Alternative.  It will contest in three constituencies in the upcoming elections (East Belfast, South Belfast and Fermanagh and South Tyrone).  The two candidates in Belfast, Socialist Party members Sean Burns and Courtney Robinson, are both under 20 and are raising the need to build united movements of young people and workers across the sectarian divide, Protestant and Catholic working-class people need an anti-sectarian working-class alternative.

Labour Alternative launched its Assembly election campaign on Thursday 7 April in a city-centre hotel in Belfast and announced three candidates - Courtney Robinson in East Belfast, Sean Burns in South Belfast and Conor Sheridan in East Antrim.  Sheridan seems to be standing in East Antrim instead of a candidate in Fermanagh and South Tyrone.

The two guest speakers at the launch were Ruth Coppinger, the Anti-Austerity Alliance TD for Dublin West and John McInally, National Vice- President of the civil service union PCS and an 'anti-austerity activist'.  It was stated that McInally was there in a personal capacity but nevertheless his role in the trade union was highlighted.  Advance notices of the meeting seemed to omit any reference to the fact that McInally is also a leading member of the Socialist Party.  The presence of Ruth Coppinger TD is therefore especially significant as she is also a member of the Socialist Party.

This has its roots in the expulsion in 1989 of the Militant Tendency from the Labour Party.  Those who were expelled formed Militant Labour and in 1996 it became known as the Socialist Party. It is an all-Ireland party with a northern region and a southern region.  In  the Irish Republic three of its members, including Coppinger, were elected to Dail Eireann in 2016 as Anti-Austerity Alliance TDs.

The Socialist Party is also 'the Irish section of the Committee for a Workers' International, an international socialist organisation in over 40 countries on all five continents.'

Now as regards the three candidates named by Labour Alternative: 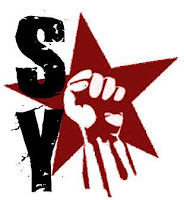 Courtney Robinson, from East Belfast, is president of the Students Union at the Belfast Metropolitan College and a member of Socialist Youth, the youth section of the Socialist Party.

Sean Burns, from South Belfast, is also a member of the Socialist Party and in fact an organiser for Socialist Youth.

Conor Sheridan is a 24-year-old accountancy student from Larne and a former pupil of St MacNissi's Garron Tower.  Back  in January he announced that he would be standing as an Independent in East Antrim but he has now thrown in his lot with Labour Alternative.

Although they are campaigning as Cross-Community Labour Alternative, it is unclear whether the 'party' is registered and recognised, and if not the three candidates will appear on the ballot papers as Independent.


Posted by Nelson McCausland MLA at 09:04