In this week's column in the Belfast Telegraph (7 April) I highlighted the fact that a banner of the UNITE trade union had been carried in a republican parade in Newry.  The parade, to commemorate and celebrate the 1916 Easter Rising, took place on Saturday and was organised by the Armagh, Newry and Mourne Centenary Committee (ANAM) 1916.

The march assembled at the notoriously-named Raymond McCreesh Park in Newry and proceeded from there to the republican plot in St Mary's Cemetery.  The marchers were led by a republican flute band from Kilkeel and the UNITE banner was directly behind the band. 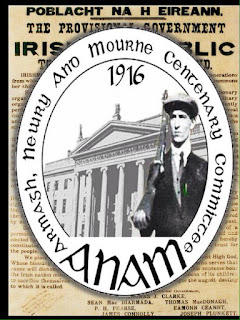 In the column I asked who authorised the carrying of the UNITE banner in the republican parade?  I also asked if this decision was taken by a local branch in Newry, how the leadership of the trade union viewed it and what are the rules of the trade union about such situations?

'The inclusion of a UNITE banner in a republican parade is damaging to the reputation of a trade union that draws its members from right across the community in Northern Ireland and there is an urgent need for UNITE to reflect on such incidents and take some action.  Trade unions have an important role in representing the interests of their members and what happened in Newry undermines the inclusivity of one of our leading unions.'

It was clear from comments and statements on social media that many members of the union were alarmed by what happened in Newry but later that day the Facebook page of 'Unite the Union Newry' defended the participation of union members with the UNITE banner in the march.

There are in fact two Facebook pages with the name Unite the Union Newry.  One is a 'Community Organisation' and carries the logo 'Unite Community Membership'.  The following statement was posted on this page:

Newry Unite community branch make no apologies for attending a recent 1916 commemoration event, that was organised by ANAM 16.

This event was non political and part funded by our local council. Invites were sent out to the broader community e.g. political parties, Trade Unions, community groups and sporting bodies.

Our invite was considered within our branch and it was unanimously agreed that we would attend the ANAM 16 commemoration; and two further commemorations that are to be held in Dublin and Belfast on the 24th/25th of April. The latter of these has been organised by Unite, which will commemorate both The Somme and 1916 Rising in a play. All three of these commemorations are non political.

Newry Unite community branch, have been to the fore in fighting austerity, sectarianism, racism, gender inequality, workers rights, disability rights and have been strong advocates of egalitarianism. Our branch members are from a wide spectrum of people; anyone can join regardless of religious, ethnic,political or sexual orientation .

The Newry area has a long held tradition for Trade Unionism; two of the "Three James's" e.g. Jim Larkin and Jim Fearon hailed from our town and are both depicted on our branch banner.

The Newry Unite community branch, is not ashamed of our Trade Union forefathers, nor will we apologise to a little, bigoted, excuse for a politician; who exudes nothing but hatred and sectarian division.

The personal abuse at the end of the union statement is pathetic and indeed almost amusing but I must pick up on the claim that a republican Easter Rising march is 'non political'!  What on earth do they mean by that?  They are actually claiming that Irish republicanism is 'non political'!

That initial post was then shared to the other Unite the Union Newry Facebook page, which has 164 members and for which the administrator is Crick Morley, otherwise Christopher Morley,  On the Facebook page he describes himself as 'chairman' and indeed he is the chairman of UNITE in Newry. He is also a dedicated republican socialist and during March he change his personal Facebook cover photo to  the image on the right.

The Facebook post is significant because it confirms that the decision to march in the ranks of the republican parade in Newry was a formal decision taken at a UNITE Community branch meeting.  It was not a case of a few members borrowing a banner and taking part unofficially.  The marchers were there with the endorsement of the Unite Community branch.

I was pleased to see the reaction to the issue from many members of UNITE.  Some I spoke to personally and I also followed the reaction on social media. What happened in Newry

Then on Friday the UNITE Regional Secretary, Jimmy Kelly, issued a statement on the Newry banner:


Unite will conduct an internal review on presence of branch banner at Easter Commemoration.

We wish to reiterate our strong commitment to inclusive, non-sectarian working-class activism.  We will conduct an internal review into the presence of one of its branch banners at a recent Easter commemoration.

Unite has a proud record of opposing division and bringing workers together for mutual benefit from all sides of the community in Northern Ireland.

I welcome the announcement of an internal review and look forward to the union announcing the outcome and any actions that may flow from it.

This is particularly important because as they said in their statement the UNITE branch also decided to participate in a Dublin commemoration on 24 April.  As regards the nature of that commemoration, it is advertised as above on Martin McKeown's Facebook page and will be organised by the republican National Graves Association.  Any internal review will have to be completed quickly or the damage and division caused by the Newry incident could well be repeated and exacerbated by a similar situation in Dublin on 24 April.  The union has really just two weeks to deal with this.

Posted by Nelson McCausland MLA at 12:00