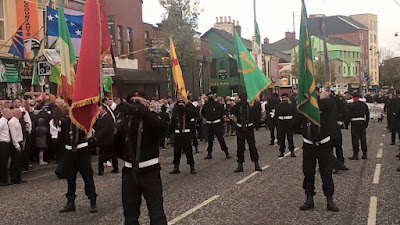 Yesterday there were two republican parades up the Falls Road to the republican graves at Milltown Cemetery.

According to the Parades Commission website the organisers of the first parade notified that there would be four bands, 500 participants and 100 supporters.

Declan McGlinchey, who died last year and was a son of the notorious INLA terrorist Dominic McGlinchey, was instrumental in setting up the Martyrs na hEireann band.

The Republican Socialist parade was led by a colour party and by a company of men in black paramilitary uniforms.  Each of them had a five-pointed red star on his beret, the same five-pointed star that is so popular with the INLA.  The uniforms were also identiical to those worn by INLA marchers in Londonderry.

This morning I spoke to the PSNI about this and was assured that they had carried out an 'extensive evidence gathering operation' during the parade.  Indeed they would start examining the evidence today.  They will then forward their information to the Public Prosecution Service.

Under section 13 of  the Terrorism Act (2000) it is illegal to parade in a uniform associated with a proscribed organisation and it is now up to the PSNI and the PPS to ensure that everything is done to bring the culprits before the courts.

Posted by Nelson McCausland MLA at 06:48