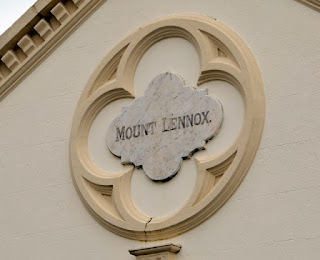 Mount Lennox, a fine old house at 683 Antrim Road in North Belfast, has been put forward for listed status.

In recent years it has been used by the Irish School of Ecumenics, which is associated with Trinity College Dublin.

The house was built around 1898 and has been put forward for B2 listing.

A quick search on the internet revealed that it was for many years the home of the Knox family, including William Knox, a Belfast merchant, who died on 25 July 1930.  The executors of his will were William Lennon, described as a gentleman, and Henry Knox, who was a grocer.  These two men were probably relatives of William Knox

Mrs Jennie Knox, who was probably the widow of William Knox, lived in the house after him and she died on 11 February 1946.  The executors of her will were Robert W Lennon, a retired merchant, and Thomas H Mayne and Joseph K Curran, who were farmers.

According to the 1901 Street Directory William Knox was a general merchant and was living at Mount Lennox, Ashley Park, Belfast, so it seems that he was the first occupant of the house, that it was built for him and that he named it Mount Lennox.

There is a possible connection between the names Lennon, Knox and Lennox, and it possible that the name Mount Lennox was based on a combination of Lennon and Knox.

So who were the Knox family?  With the name Knox they were clearly Ulster-Scots but what can we find out about the family history?

Posted by Nelson McCausland MLA at 09:55