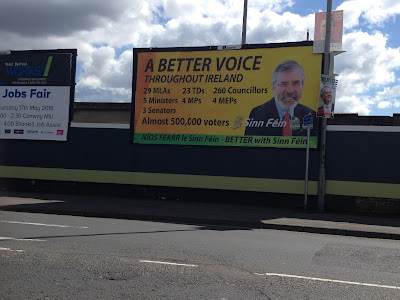 There is an irony about Sinn Fein placing an election poster on the front wall of the derelict Casement Park.  The dereliction is actually a testimony to the incompetence of the Sinn Fein machine.  What on earth led them to put the advertisement on what is a constant reminder of their failure?

However there is another irony about this poster.  The main message is that Sinn Fein provides 'A BETTER VOICE'.  However the truth is that the '4 MPs' mentioned on the poster cannot contribute to the voice.

The third irony is that the Sinn Fein advertisement is beside another advertisement, for a Jobs Fair.  Casement is a major project and it was argued that it would create many construction jobs.  However there has been no construction and therefore no jobs.  Another failure for Sinn Fein.

Posted by Nelson McCausland MLA at 18:58