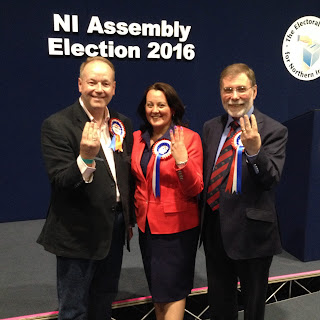 I found the newspaper reports of the result in the North Belfast constituency particularly interesting after all that the pundits had said before the election about a UUP revival.

Simon Doyle, writing in the Irish News yesterday, said: 'The DUP three - Paula Bradley, Nelson McCausland and William Humphrey - were all in pole position, or more accurately if one must use a tortured motor racing metaphor, they occupied three of the top four places in the grid after stage one.'  That was due to our strong vote and our disciplined vote-management.

He went on to say: 'The Ulster Unionist Party would have expected its bright hope to do better.  It had selected a popular, well-known cleric in Lesley Carroll, but her 1,972 first preferences failed to make a dent in the DUP's massive vote. ...  The PUP also polled badly, leader Billy Hutchinson receiving just 1,238 first preference votes and then struggled to pick up transfers.'

Noel McAdam wrote in the Belfast Telegraph: 'The performance of the Rev Lesley Carroll in North Belfast, in particular, was very disappointing [for the UUP].  In unionism the DUP is now in pole position across Belfast.'

Noel is absolutely right.  Across the four Belfast constituencies there are now 8 DUP MLAs and just 1 UUP MLA.  Before the election it was 7 DUP MLAs and 2 UUP MLAs.

In spite of some earlier predictions of a surge for the UUP, the pundits now have to accept that the DUP has had a remarkable election result.

Posted by Nelson McCausland MLA at 02:55