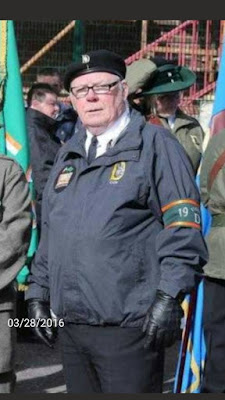 Last night I called into the Belfast Central Library and parked my car nearby in Union Street before going in.

As I was walking the short distance from the car to the library I noticed three men standing talking and as I passed them one of them separated himself from the others and started to follow me.

I looked round and it was none other than Frank 'Dipper' Dempsey of the Carrick Hill Residents Association.  He was out for a walk with his little dog and was carrying a heavy blackthorn stick.

We had a short exchange of words and I detected that Frank was not exactly pleased to see me.  I can be fairly confident that I will not be on his Christmas card list this year, or indeed any other year!

As I turned towards the library I did comment on the heavy blackthorn stick that he was carrying and also on the fact that on this occasion he was not wearing a uniform.  At that point the short conversation, which probably lasted no more than a minute, came to an end.

What surprised me however was the fact that he even spoke at all.  I would be very keen to talk to Frank Dempsey but not in a side street off Royal Avenue.  The best place would undoubtedly be in a radio or television studio.  There are just so many things I would love to ask him about directly ... including his role in a Provisional IRA D Company reunion.  [Andersonstown News August 2012]

The unfortunate thing is that he seems reluctant to appear in a radio or television studio to engage in a debate ... you would almost think he didn't want to answer questions about various interesting subjects ... such as that Provo D Company reunion.

Readers of this blog will of course remember that at the reunion it was Frank Dempsey himself who handed over a special gold medal to Billy McKee, a founder member of the Provisional IRA, and later a supporter of Republican Sinn Fein.  Readers may also remember that when McKee was asked about the atrocity known as Bloody Friday he said, 'I'm not going to condemn it or the men that carried it out.  No way.'

The passage of time has certainly not mellowed Billy McKee and from what I heard last night it hasn't really mellowed Frank Dempsey either.

Posted by Nelson McCausland MLA at 17:10