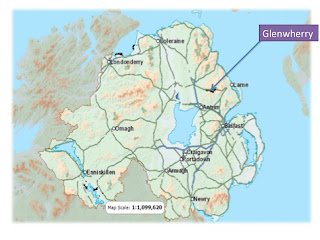 I came across an Ordnance Survey map for east Antrim yesterday and was impressed by the number of placenames with Ulster-Scots elements in them, such as Moss Bridge, Blair's Moss, Rigg Moss, Burnside, White Brae, Brae Nook, Knowehead, Braetown, Glenburn and Braepark.

However there was one I was less familiar with and that was Duncan's Flow.  The word flow' appears in the Dictionary of the Scots Language as meaning 'a wet peat bog', 'a swamp' and 'a low lying piece of watery land'.

So what do we know about Duncan's Flow?

Well back in 1876 it got a mention in the Journal of the Anthropological Institute of Great Britain and Ireland., which carried a lecture that had been delivered to the Institute band had been written by G H Kinahan MRIA.

During a short stay in the co Antrim, my attention was called by J Wyley Esq, of Drumadarragh House, to an unrecorded ancient roadwaythat for centuries has been buried under an accumulation of peat, and only in recent years has been discovered while cutting turf.  The bog called Duncan's Flow, in which this road or cash (casan, a path) is buried, is situated near the west boundary of the townland of Ballyalbanagh, co Antrim (Ordnance Survey Map, sheet 39), and about four miles north of the small town called Ballyclare.

Before that it was mentioned in an article by Abraham Hume in the Ulster Journal of Archaeology in 1853 as 'Duncan's Flow in Glenwherry'.  The article also mentioned Mather's Flow at Dromore.

I assume that the Drumadarragh House referred to in relation to J Wyley was the house near Doagh, which is about ten miles from Glenwherry.

But who was the Duncan of Duncan's Flow and was it the surname of an earlier owner of the land?