The GAA and the Secretary of State 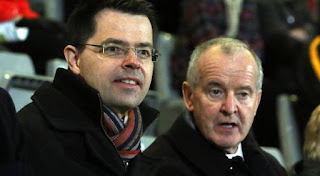 The Northern Ireland Secretary of State attended the 2017 final of the McKenna Cup, a GAA trophy that was presented by the Roman Catholic Bishop of Clogher, Patrick McKenna, back in 1927.  The match took place on Saturday in Newry and the teams taking part were Tyrone and Derry. 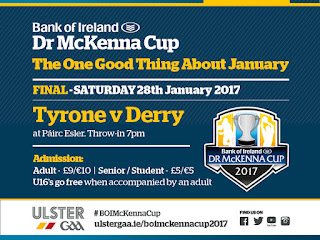 Although the game was between two teams from Northern Ireland and took place in Northern Ireland the event included the playing of the national anthem of the Irish Republic, known as The Soldier's Song.

The McKenna Cup competition involves teams from the old nine-county province of Ulster, the six counties of Northern Ireland, and the three southern border counties of Cavan, Monaghan and Donegal, so it could be argued that there should be two anthems, The Soldier's Song and God Save the Queen, reflecting the fact that the participating teams are drawn from counties in both the Irish Republic and the United Kingdom.  However only The Soldiers' Song was played, as set out in the constitution of the GAA.

James Brokenshire arrived after the anthem had been played and has now been criticised for this by Labour MP Conor McGinn, who said his action was 'regressive'.  However this incident highlights the inherent Irish nationalism of the Gaelic Athletic Association and illustrates why it is an organisation that excludes unionists.

Back in December the GAA president Aogan O Fearghail was asked if the GAA would change its position on flying the Irish tricolour and playing The Soldier's Song at at home games and he was quoted in the Irish News (5 December 2016) as saying:

He also went on to reaffirm the political stance of the GAA and spoke about 'the future we all aspire to, certainly within the GAA, to a new unified Ireland.'
Posted by Nelson McCausland MLA at 03:03