Should parents get extra tax credits if their children learn Irish?  Well Gerry Adams thinks so!

On 18 May 2016 Sinn Fein president Gerry Adams TD spoke during a Dail debate which followed a government statement on the Irish language. 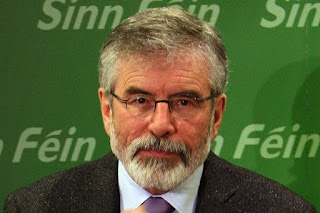 Here is a short extract from that speech which contain's one of Sinn Fein's proposals for promoting the Irish language.  Gerry Adams said:

In Sinn Fein’s budget last year we put forward some recommendations at a cost of €10 million in total which could have a positive influence on the Irish language. Among those actions, was an increase of €5 million of the capital fund of Udaras na Gaeltachta and an increase of €0.75 million in the fund for community schemes and a tax credit for parents whose children were attending Gaeltacht courses.

This related to a budget they had proposed for the Irish Republic but Sinn Fein are a cross-border party.  We can only conclude therefore that Sinn Fein envisage extra tax credits for parents in Northern Ireland who send their children to Gaeltachts to learn Irish

At present children from Northern Ireland can visit Gaeltachts in the Republic but Sinn Fein's demand for an Irish language Act included the creation of Gaeltachts in Northern Irelan.  When she was asked about this on a Talkback programme, former Sinn Fein culture minister Caral Ni Chuilin said that they were developing a Gaeltacht in West Belfast.

So will Sinn Fein be demanding tax credits for parents who send their children up the Falls Road to learn Irish?

And if you lived in the West Belfast Gaeltacht and sent your child to an Irish medium school, would you be able to get the tax credit as well?

Posted by Nelson McCausland MLA at 23:22