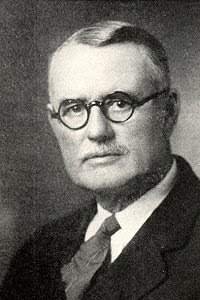 This is the story of an Ulsterman who wrote  more than 5,000 hymns.

The Clements family emigrated from Ulster to America in 1870 and settled in Liberty, New York.

John was converted to Christ in 1886, at the age of eighteen, through a sermon preached by the famous evangelist D L Moody at the First Baptist Church in Binghampton, New York.

Clemens went on to write many hymns and the first was Man the Life-Boat.  The music for this hymn was composed by Daniel Towner, the song-leader for D L Moody.

He was the first president of the Practical Bible Training School in Lestershire, now Johnson City, New York, and he held that position for from 1900 to 1914.  The school had been founded by his friend Rev John A Davis and in 1914 Davis succeeded Clements as president.  It was later renamed the John A Davis Memorial Bible School and is now Davis College.

His hymns include No night there, If thou shalt confess, Jesus leads, Lord send us forth and Service is our watchword.

He also published Songs of Redemption and Praise and was co-editor, with Ira Allen Sankey, the son of Ira D Sankey, of Best Endeavour Hymns, which was published in Chicago in 1907.

J R Clements died in Johnson City, New York, on 1 January 1946 and he was buried in Floral Park Cemetery.

When we come to consider the literary heritage of Ulster, it is important not to forget our hymnwriters, including John Ralston Clements.
Posted by Nelson McCausland MLA at 18:13