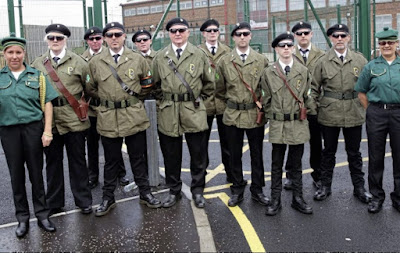 On Sunday afternoon the Falls Cultural Society/D Company organised a parade and commemoration for the notorious D Company of the Provisional IRA.

They were accompanied by a republican flute band as they made their way from Barrack Street, around the Lower Falls area, to a republican Garden of Remembrance on the Falls Road..

There wreaths were laid and the 1916 Proclamation was read before 'a decade of the Rosary was said in Irish'.

According to a report in the Irish News (17 April):

A spokesman on behalf of 'D' Company and the Falls Cultural Society told the assembled crowd: 'British rule was wrong in 1916 and it remains wrong today in 2017.  Let nobody tell you any different.'

Once led by Brendan 'the Dark' Hughes, 'D' Company was responsible for some of the most gruesome killings of the Troubles, including Bloody Friday in July 1972, when the IRA detonated 19 car bombs in Belfast in the space of an hour, killing nine people and injuring 130.  In the same year, its members are also understood to have been behind the abduction and murder of Jean McConville, the mother-of-10 who was taken from her home in the Divis Flats by republicans in 1972.

The Irish News report was accompanied by a photograph of 'Carrick Hill Residents spokesman ' Frank Dempsey and it stated that he was 'one of the participants'.


The Facebook page of the Falls Cultural Society expressed the thanks of the society to veteran republican Billy McKee, one of the founders of the Provisional IRA and the first OC of the Provisionals in Belfast.  In 2011 he refused to condemn the Bloody Friday atrocity and in 2012 he attended a D Company 'reunion' where he was presented with a gold medal by Frank 'Dipper' Dempsey.

The Garden of Remembrance was opened in 2001 and the guest speaker on that occasion was Sinn Fein president Gerry Adams who commended the families of the dead volunteers of D Company for their 'great sacrifice to the republican struggle'.  A report in An Phoblacht (28 June 2001) stated that D Company were known as 'the Dogs' and that their mascot was an Irish wolfhound.

There are two very significant things about the commemoration.  The first is the reference to 'British rule' which seems to be at odds with Sinn Fein having signed up to the 'principle of consent'.  The second is the retention of the practice of reciting a decade of the Rosary in Irish.

Posted by Nelson McCausland MLA at 12:16