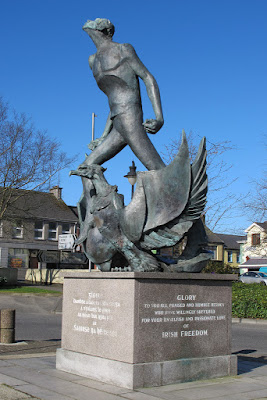 Sinn Fein  like to sanitise their past and there is a good example in the heart of the village of Crossmaglen.

The town square is dominated by an IRA memorial which was erected in 1979 and was the work of a sculptor named Yann Renard-Goulet (1914-1999), who was born in Brittany in France.

Goulet was a passionate Breton nationalist and a sculptor.  Before the 2nd World War he was a member of the Breton National Party (Parti National Breton PNB), which modelled itself on Sinn Fein, and during the war he joined the assault section of Bagadou Stourm, Breton nationalist stormtroopers who were allied to the Nazis.  He also collaborated with the pro-Nazi nationalist newspaper L'Heure Bretonne and in 1941 in Paris, he became head of Bagadou Stourm.

After the liberation of France by the Allies, Goulet left with his wife and two children in 1947 and they travelled to Eire on false passports.  However he was tried in France in his absence on charges of collaboration with the Nazis and was found guilty.  Goulet was one of a number of Nazi collaborators who were welcomed by the authorities in Eire and so he was able to escape the death sentence.  He acquired Irish citizenship in 1952 and eventually he was appointed professor of sculpture at the Royal Hibernian Academy.  Goulet was also made a member of the prestigious arts organisation Aosdana in 1983.  The Nazi collaborator was now a member of the cultural establishment in the Irish Republic.

Goulet was a political activist, both as a Breton separatist and an Irish nationalist, and he was commissioned to create public works commemorating the IRA and other republicans.  These included the Custom House memorial in Dublin (1956), the Ballyseedy memorial in Tralee (1959) and the East Mayo IRA Brigade memorial (1972).

Towards the end of the 1960s Goulet claimed to have taken over the reins of the Liberation Front of Brittany (Front de Liberation de la Bretagne FLB), which was founded in 1965,  and to have been behind all their terrorist attacks.  In 1969 he became secretary general and chair of the Comite National de la Bretagne Libre and published the communiques of the FLB.

Yann Goulet became an ardent republicans and at the start of the Troubles in 1969 he sent a message of support for a United Ireland to the IRA.  He also befriended Ruairi O Bradaigh, president of Sinn Fein and spoke at several Sinn Fein conferences.

In 1972 Goulet took on an even more important and deadly role for the IRA.  At that time the Libyan leader Colonel Gaddafi made contact with the Provisonal IRA through Yann Goulet and the purpose of the approach was to offer the IRA arms and explosives.  Nothing came of that initial contact but contact was re-established, again through Goulet, and an arrangment was made for Joe Cahill to travel to Tripoli.  Goulet was therefore a key figure in the establishment of the biggest source of weaponry for IRA terrorists.

Goulet was the central figure in a rather bizarre includent in 1981 when he travelled to Belfast at the request of O Bradaigh, to make a death mask of the IRA hunger striker Bobby Sands but the project was turned down by the local Belfast IRA leadership.  His last major commission also had an IRA connection and it was for an IRA memorial for Milltown cemetery in West Belfast.  However it was never completed because of illness and Yann Goulet died on 22 August 1999, two days after his 85th birthday.

On 9 September An Phoblacht, the newspaper of Sinn Fein and the IRA, published an obituary.  The memorial in Crossmaglen is entitled Glory and according to the An Phoblacht obituary it was erected 'in dead of night as a defiant surprise for the occupying forces!'

Sinn Fein try to portray themselves as radical and progressive but they seem to have had no difficulty with inviting a Nazi collaborator on to their platforms or in employing the same Nazi collaborator to produce their Crossmaglen sculpture.  Of course, why would they have a problem with Goulet?  During the 2nd World War the IRA themselves collaborated with the Nazis.

Goulet was just one of a number of Nazi collaborators who found a home in Eire and became prominent figures there. This is something the Irish Republic probably prefers to forget and indeed Goulet's biography on the Aosdana website and his entry in the Dictionary of Irish Biography are sanitised.  The DIB entry by Bridget Hourican largely ignores his role as a Nazi collaborator and totally ignores his role in the arming of the Provisional IRA by Colonel Gaddafi.

However according to Sinn Fein MLA Conor Murphy the monument is 'a symbol of Crossmaglen' and a 'focal point for visitors and tourists'.  'Over the years it has attracted the eye of many tourists who wish to know more about its history but unfortunately there is very little on the monument to describe how it came to be.'

I wonder what Conor Murphy was thinking about in the way of additional information?  Perhaps some information about how the sculptor was a Nazi collaborator who helped to arm the Provisional IRA with the Libyan weapons that were used to murder so many innocent men, women and children.

Posted by Nelson McCausland MLA at 01:01