Thirty years ago Mairtin O Muilleoir was elected to Belfast City Council in a by-election for Upper Falls.  On the same day Fra McCann was returned as a councillor in Lower Falls.  An Phoblacht/Republican News (29 October 1987) reported the 'Sinn Fein victory' and the photograph of the two new councillors shows a young Mairtin O Muilleoir at just 28 years of age.

O Muilleoir had already been active in Sinn Fein for some years as a cultural officer and earlier in 1987 he had been sent by the party on a four-day visit to Wales to meet Welsh language activists.  The visit was controversial but it received the support of a number of Labour Party politicians, including Jeremy Corbyn MP and Ken Livingstone.

He was accompanied on the Welsh visit by another Sinn Fein cultural officer Padraig O Maolchraoibhe.  He was known to many outside Irish language circles as Pat Rice and was elected as a Sinn Fein councillor in Lisburn in 1989.

Both men were cultural officers and as such had been involved in an infamous Irish language seminar held on 26 May 1982 in West Belfast.  They had organised the Sinn Fein event and Padraig O Maolchraoibhe had told those at the seminar:

I don't think we can exist as a separate people without our language.  Now every phrase you learn is a bullet in the freedom struggle.

The proceedings of the day, including this notorious statement, were later published by Sinn Fein as a booklet, Learning Irish, with an introduction by Mairtin O Muilleoir. 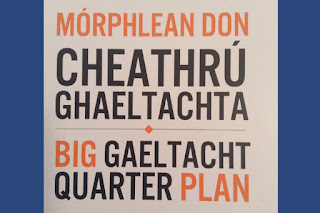 The Sinn Fein demand for an Irish Language Act is the culmination of a campaign that has been ongoing since 1982 and Mairtin O Muilleoir has been a major driving force behind that strategy since the very start.

He has been involved in Irish language publishing projects and job creation initiatives, the Gaeltacht Quarter development in West Belfast and the £8 million Irish language capital fund An Ciste Infheistiochta Gaeilge.

There can be little doubt that his knowledge and experience in the field of Irish language and culture will be a major asset to the Sinn Fein negotiating team when negotiations recommence after the forthcoming Westminster election.  He knows the strategy because he was there at the start when it was formulated and he understands the way in which a free-standing Irish Language Act would empower Sinn Fein to advance their republican agenda.

Posted by Nelson McCausland MLA at 11:52