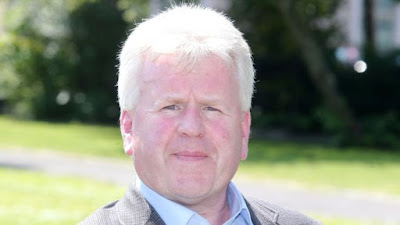 Ciaran was the Green Party candidate in West Tyrone in the Assembly election in March 2017, when he polled just 412 first-preference votes.  He also stood in the Westminster election in June 2017 and polled 427 votes, which was just 1% of the votes cast.

At the May 2016 Assembly election he received 458 first preference votes.

His first Westminster outing for the Green Party was in May 2015 when he managed to get 780 votes.

In December 2014, when he announced he would stand for the Green Party for Westminster in 2015, the Ulster Herald (18 December) reported that the Sixmilecross man had 'previously stood without success in Assembly and local government polls.'  So what was his political record before that?

Ciaran Mcclean was a candidate in West Tyrone for the 2010 general election but there are contradictory accounts of whether he stood as an independent or for the Green Party.

The BBC website (21 April 2010) stated: 'Independent candidate Ciaran McClean stood for the Democratic Left in the 1996 election for the Northern Ireland Forum in Upper Bann,  The Democratic Left merged with the Irish Labour Party in 1999.  Mr McClean is active in campaigns against the proliferation of quarries around the mid-Tyrone area.'

However the Belfast Telegraph (3 May 2010) reported: ''Well-known environmental and community activist Ciaran McClean will represent the Green Party, having previously fought elections as a socialist candidate.'


The BBC reference is to the fact that he had stood for the Democratic Left in 1996, in an election where he received just 36 votes!  The Democratic Left was formed in 1992 from the Workers Party after revelations about the ongoing role of the Official IRA but it had little success in Northern Ireland and dissolved in 1999.

That association with the Democratic Left is not altogether surprising since Ciaran is a son of Paddy Joe McClean, who stood for election for the Workers Party back in the 1980s. [Ulster Herald 21 May 2014] 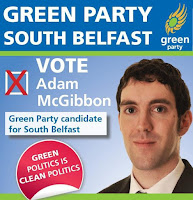 McGibbon is now a significant figure in the party and describes his politics as 'Red-Green', a combination of Green and Left-wing beliefs.

So back to Ciaran McClean and his judicial review of the Conservative-DUP arrangement.

Perhaps, just as the Conservative DUP arrangement brought a lot of media focus on the DUP, we may see a similar focus now on the Green Party and their views ... or maybe not!

Posted by Nelson McCausland MLA at 12:04