A 'war of words' in Antrim and Newtownabbey 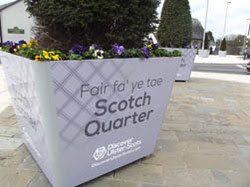 Back in March 2017 Antrim and Newtownabbey Borough Council agreed to the installation of Ulster-Scots heritage signs in the historic Scotch Quarter in Antrim.  It was part of a branding exercise of the area, the name of which reflects the Scottish settlement in the old town.


More recently the council rejected a proposal for bi-lingual street name in the borough.  This affects both the Irish language and the Ulster-Scots language equally so is clearly not an equality issue but that is not good enough for Sinn Fein and an Irish language group in Crumlin, who are keen to install bilingual Irish-English street names in parts of the borough.

Sinn Fein councillor Anne Marie Logue said this was a slap in the face for Irish speakers and that it was 'a breach of equality legislation'.

Meanwhile Cait Ni Ruanaidh (Cathy Rooney) from Ionad Teaghlaigh Ghleann Darach, an Irish language centre in Crumlin, was more expansive.  She said, 'This is downright sectarianism.  It demonises our Irish language community.  We will be lodging a complaint with the Equality Commission.  We believe the Council is in breach of equality regulations.'

It is a spurious argument which attempts to rewrite the position by equating heritage signage in a small quarter with a council-wide policy but it is significant that both Sinn Fein and the group in Crumlin focus on an 'equality' argument and of course 'equality' is what Gerry Adams said should be used to 'break the b......s'.

But perhaps there is an equality issue here. 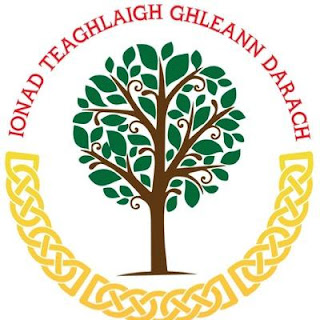 Ionad Teaghlaigh Ghleann Darach is the proud owner of a brand new and purpose built centre in the village of Crumlin.

The centre was part-funded by An Coiste Infheistiochta Gaeilge, an £8 million fund that was demanded by Sinn Fein and and provided by a former Labour government at Westminster.  The £8 million was handed over by the Treasury in London to a fund whose board is chaired by a veteran Sinn Fein politician and whose director is a former Sinn Fein councillor.

Oh and here are a few photographs from the Irish language centre's Facebook page!


There is no equivalent capital investment fund for any other cultural tradition and that is an equality issue but of course Sinn Fein managed to avoid the equality issue and the scrutiny of the Equality Commission by getting the money straight from London.

So ten heritage planters in the Scotch Quarter, paid for by the Ulster-Scots Agency, causes an outcry from Sinn Fein and the Irish language group in Crumlin.  But they prefer to 'houl their wheesht' about the millions that have been lavished on the Irish language by London, with no concern for equality.

Oh and as regards the Irish language family centre in Crumlin.  Was that the location for the celebration of the 1916 Easter Rising, with replica weapons and uniforms, as published on their Facebook page?


Posted by Nelson McCausland MLA at 06:36