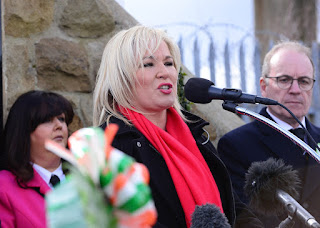 Michelle O'Neill, vice president of Sinn Fein, was the main speaker at the Easter Sunday republican commemoration in Belfast.

Speaking at the republican plot at Milltown Cemetery she said that Sinn Fein wanted a referendum on the border 'within the next five years'.

Now if the time limit last year was five years, surely this year it should be down to four years?

Sinn Fein are not very good at history but now it seems they're very poor at arithmetic as well.

In truth Sinn Fein want to talk up their demand for a referendum because they know a referendum would be divisive and disruptive and Sinn Fein favour division.  They also want to distract their supporters from the fact that they failed to deliver on their promise of a United Ireland by 2016.

Posted by Nelson McCausland MLA at 09:38