Antrim Camogie and the Felons Club

The Felons Club in West Belfast is a social club for Irish republicans who have served time in prison. Back in 2016 the Felons Club agreed to sponsor the Antrim camogie minor team with between £1,000 and £1,500 a year..  In return the name of the Felons Club was printed on the team jerseys.

According to the Felons Club chairman Gerry Scullion: 'We were approached by an official from Antrim Camogie a few years ago and asked if we woud consider sponsoring the minor team.  We were happy to do that and did did everything asked of us, from sponsorship to feeding the kids before matches and sometimes afterwards.'

'Then earlier this year we were asked if we would sponsor the senior team and we were delighted to do that.'

However Antrim Camogie has now cancelled the sponsorship deal and according  to Scullion: 'We then received correspondence from the Antrim chairperson who said they weren't allowed to be linked to any entity that was political.'

The story was reported in the Irish News (24 May 2018) but when the newspaper contacted Antrim Camogie they said, 'we have no comment to make'. 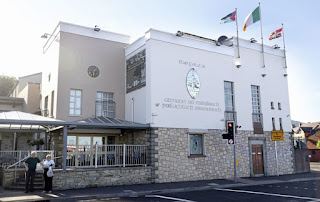 The Felons Club can be traced back to the 1940s when Gerry Adams Sr and Joe Campbell, both former IRA prisoners, established Ex-Penal Servitude Prisoners and acquired club premises.

This organisation was later renamed the Irish Republican Felons Association and they are the owners of the Felons Club.

In 1999 Danny Morrison wrote: 'Nelson Mandela is an honorary member; so is Beirut hostage Brian Keenan.'

There are a lot of questions that could be asked about this but much of the media simply ignored it.


Posted by Nelson McCausland MLA at 02:18