Last Sunday 20 May the republican organisation Saoradh commandeered a children's play park in Newry to commemorate the IRA terrorist and hunger striker Raymond McCreesh.  It was the 37th anniversary of his death but the Saoradh event seems to have had a limited appeal.  The photograph below will tell you all you need to know about the size of the crowd. 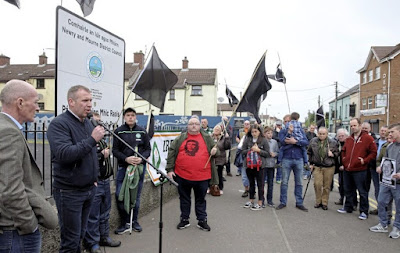 The children's park was renamed after McCreesh in 2001 and has been at the centre of an ongoing controversy as Sinn Fein and SDLP councillors have voted to retain the name Raymond McCreesh Park.  With the last vote a few SDLP councillors abstained but the rest of the SDLP members voted with Sinn Fein. 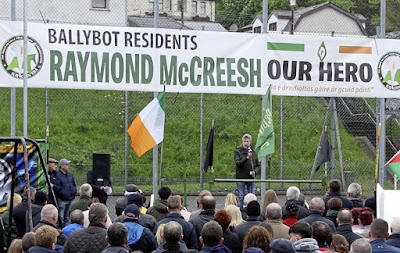 The Saoradh event was on Sunday and then on Monday night (21 May) it was the turn of Sinn Fein.

Sinn Fein MP Mickey Brady chaired the gathering and said: 'Sinn Fein will continue to remember our patriot dead.'  The main address was given by former IRA hunger striker Paddy Quinn, who was arrested on 25 June 1976 on the same IRA operation as Raymond McCreesh.  The following year he was sentenced to 14 years for attempting to kill soldiers, 14 years for possession of an Armalite rifle and five years for membership of the IRA.

Sinn Fein estimated that the crowd numbered 300 but as the photograph above shows, it was less than that, perhaps 200.  Nevertheless it was much larger than the Saoradh event.


You would think that the media would be all over a story about a Westminster MP who addressed a republican crowd at a children's park named after a terrorist and at an event to honour the terrorist.  But then of course, as so often happens, Sinn Fein get a bye-ball.

The story was covered in the Irish News and it got a mention in the Radio Ulster newspaper review but seems to have passed largely unnoticed by the mainstream media.

Posted by Nelson McCausland MLA at 09:24