The actions of the Cliftonville Football Club players and supporters on Saturday were demeaning to the oldest football club in Ulster, and indeed in Ireland.  Their behaviour was also disrespectful to those who founded the club and guided it through many decades.

Unfortunately the photograph of the players and manager, standing together on the pitch on Saturday, with their heads bowed during the national anthem, sent out a message that today this team only fields nationalists.  Whether that is true or not is irrelevant.  That was the clear message on Saturday. 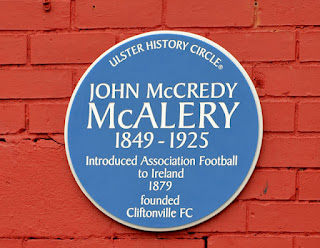 Such antipathy to the Queen and the national anthem would certainly have horrified the founder of the club, John McCredy McAlery (1849-1925).

As well as founding Cliftonville Football Club in 1879, McAlery was also the man who introduced football to Ulster.  He had seen the game played in Scotland and when he introduced it into Ulster it was played under the rules of the Scottish Association.

McAlery was also the moving force behind the formation of the Irish Football Association in 1880 and became the first secretary of the IFA.. In 1882 he was the captain of the Ireland team in their first international match, which was against England, although a 13-0 defeat must have highlighted the fact that they had a lot of work ahead of them.

J M McAlery was also a successful businessman and much more.

He was a devout Presbyterian, with a keen interest in the Bible and in biblical prophecy.  His wife shared his views and she was the daughter of a Presbyterian minister.

At that time there was a strong temperance movement in Ulster and McAlery served on the council of the Irish Temperance League which advocated total abstinence.  He also served on the board of the Royal Victoria Hospital.

The latter part of the 19th century and the early years of the 20th century covered three home rule crises and saw the emergence of a strong Ulster unionist movement to preserve the Union.  McAlery was a convinced Ulster unionist and he was active in support of the West Belfast Division in Belfast, as well as a member of the Orange Order.

I think it would be fair to assume that the founder of the club, who was a royalist as well as a unionist, would have been horrified by what happened on Saturday.

There is a short biography of McAlery on the website of the Ulster History Circle's Dictionary of Ulster Biography.  It records in some detail his contribution to football and mentions his business interests but unfortunately omits any reference to the other aspects of this notable Ulster-Scot.

Another of the early members, William Kennedy Gibson (1876-1949), played for the club and also played thirteen international games.  Later he became president of Cliftonville Football Club.  Like McAlery, Gibson was a strong unionist and was elected to Belfast Corporation as an Independent Unionist, with the support of the Belfast Citizens Association.


Posted by Nelson McCausland MLA at 08:53