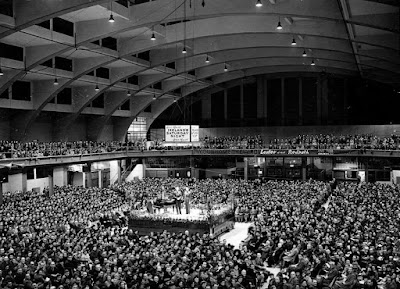 I came across this photograph of the King's Hall on the Old Belfast Photographs Facebook page.  The hall was packed to capacity and there was what appeared to be a boxing ring in the centre but this was not a boxing match.  The information with the photograph stated that the photograph was taken in 1946 during an evangelistic campaign by Redpath and Lester.

I recognised the name Redpath as that of Alan Redpath (1907-1989), pastor, preacher, evangelist and author, but who was Lester and what was the occasion?

The answer is that this was during an evangelistic campaign in Belfast in September 1946.  It was called the Christian Challenge Campaign and was organised by the Irish Evangelisation Society.  The series of meetings started in the Assembly Buildings but it was unable to accommodate the crowds and so they moved to the King's Hall, with six thousand people in attendance on some of the nights.

The meetings ended on 27 September and the previous morning the Belfast News-Letter carried an account of one of the meetings.  It opened with these sentences:

'Standing in the gallery of the King's Hall last night, I looked down on more than 6,000 people who had come from every part of Belfast, and from further afield, to attend a Christian Challenge Campaign service, held by the Rev Geoffrey Lester and the Rev Alan Redpath.  It was a remarkable sight.  Every corner of the vast hall was crowded to capacity.'

In the language of that time, the newspaper reported the words of one of the people present at the meeting:

'One of the twenty cripples, for whom seats had been reserved, said afterwards that the service had left on him a very deep impression. 'We may be crippled in body,' he remarked earnestly, 'but anyone who cannot understand and appreciate the message of Mr Redpath must be suffering from a crippling far more terrible than anything we have experienced.'

At that time Alan Redpath was pastor of Duke Street Baptist Church in London and the other person was Rev Geoffrey Lester (1916-1998)  He had served during the Second World War in the ranks of the Irish Guards but after being invalided out of service he trained for the ministry and after some years on the mission field was an evangelical minister in the Church of England.  Geoffrey Lester was also noted as a soloist and song leader.and it was in that capacity that he accompanied Alan Redpath.

I must admit that I had never heard of Geoffrey Lester but having read some of his obituaries I can warm to the man and his strongly biblical views on a wide range of issues, some of which have been in the news recently.

Ulster had known the blessing of the 1859 revival and had been visited by many great American evangelists such as D L Moody and R A Torrey.  It had also experienced a measure of revival through the ministry of our own W P Nicholson in the 1920 and 1930s.  As a result Christianity in Ulster was strongly evangelical.  Sadly since then we have seen a general downgrade, spiritually and doctrinally, with many churches shaped more by the world than by 'The Word'.

However our God is the same yesterday, today and forever.  His Word is unchanged, His Son is still mighty to save and what He has done before here in Ulster, He can do again.
Posted by Nelson McCausland MLA at 04:54