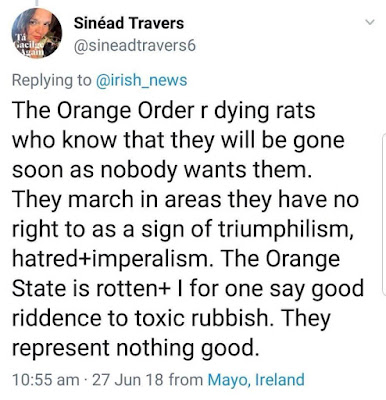 On her Twitter account Sinead describes herself as : 'Irish Republican - Barrister - Feminist - SF activist - Free Palestine. Music + Poetry are my Gra. Our revenge will be the laughter of our children. Bobby Sands MP.  So we know that she is a barrister and a Sinn Fein activist.  We also know that her spelling leaves a lot to be desired with 'triumphilism', 'imperalism' and 'riddence'


That is from sineadtravers6 but there is also a sineadtravers account, without the 6.  This Sinead describes herself as: 'Sinn Fein - Proud Irish Republican - Economic Policy Adviser - Barrister - Writer - Poetry, Music and Law are my passions.'  Her location is given as Beal Feirste, Eire.

Mary Lou McDonald and Declan Kearney can say all they want about respect and reconciliation but their words are merely window-dressing.  Sinead Travers has shown us the sort of sectarianism that is really at the heart of the party.

Declan Kearney has talked about the future of the Orange Order in a united Ireland but this is what one Sinn Fein activist sees as the future of Sinn Fein and I am sure she speaks for many others.

It was ironic that she was tweeting from county Mayo - the county that gave us Caitriona Ruane and the county whose history was for ever tarnished by the Mayo library case - one of the most notorious examples of discrimination against Protestants in the southern state.
Posted by Nelson McCausland MLA at 14:08