Francie Molloy: civil rights was about 'bringing down' the state

Yesterday I heard it straight from Sinn Fein MP Francie Molloy.  When he was marching or marshalling a civil rights march back in 1968 his heart was set on 'bringing down [the state] through civil rights'.

Of course that is what most unionists have always believed about the civil rights movement but some nationalist politicians and commentators have denied that this was the intention of many of the marchers.

On this occasion Francie Molloy simply confirmed that unionists were right in their assessment of the republican movement and the Northern Ireland Civil rights Association. 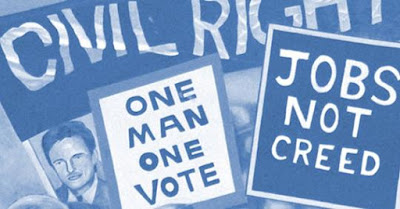 The event was part of the West Belfast Festival - Feile an Phobail and the other panelists were Hugh Scullion (Workers Party). Francie Molloy MP (Sinn Fein) and Brid Rodgers (SDLP).

There was much discussion about the real aims of the marchers and both Hugh Scullion and Brid Rodgers said that the aim was 'reform' of the state.  However Francie Molloy, who was a steward at the first NICRA march from Coalisland to Dungannon in August 1968, was quite clear that his aim was 'bringing it down through civil rights'.

It reminded me of Gerry Adams comment about equality.  He asked how anybody could be against 'equality' but stated that it was really Sinn Fein's 'Trojan horse' to break the b......s.' -

It was just the same with the civil rights movements, because there were some participants who wanted to 'reform' the state but it was really Sinn Fein's 'Trojan horse' to 'bring down' the state.

I will accept that it was not accurate to say that CRA = IRA or IRA = CRA but it was absolutely right to say that the IRA was a large part of the CRA.

And Francis Molloy should know.  He told us that he was a member of Sinn Fein and had been at 'training' in 1966.  Indeed we already knew of his role in 1968 because for the 40th anniversary in 2008 he joined Michelle O'Neill and Bernadette McAliskey at the unveiling of a commemorative  stone in Coalisland. Danny Morrison wasn't on the panel but he was in the front row of the audience and he took opportunity to speak at some length about the wrongs of the British state.  He even went as far back as partition, along 100 years ago, and spoke about the number of Roman Catholics who had been killed by loyalists and the police.

There was no mention of the number of Protestants who were murdered by republicans on both sides of the border and that gave me the opportunity to ask him about a Sinn Fein booklet, The Good Old IRA.

When I asked him he confirmed that he was the author of the booklet and I pointed out that it had been written to justify the worst acts of Provisional IRA terrorism by recalling the atrocities perpetrated by Irish republicans during the War of Independence and the Civil War.

The discussion was wide-ranging and there was mention of the role of the Communist Party and the the role of the Trotskyites in the People's Democracy.  The Communists prefer to forget that while they were demanding 'civil rights' in Northern Ireland they were also supporting the Russians who had just driven their tanks into Czechoslovakia to put down dissenting democratic voices there.  Their loyalty to Russia was greater than their love for civil rights.

This was my first visit to St Mary's University College, which is part of Queen's University Belfast and I was struck by the ethos of the building. As we were sitting at the front of the lecture theatre we were faced by a wall which had a large crucifix on one side and a portrait of the pope on the other side.  I wasn't in any of the other rooms but in the the corridors I saw a quite a number of statues of
the Virgin Mary.

I am not familiar with the differences between the status of Saint Mary's and its relationship with Queen's University, and the status of the Presbyterian Union Theological College and its relationship with Queen's University.  However recently there was some controversy about the ethos of the Presbyterian College and there was to be a review.  I just wondered if this will have any implications for the ethos of Saint Mary's, which is a college of the university.

Finally. there was a number of talks and discussions underway in St Mary's yesterday and the place was very busy but I must say that when I arrived I felt as if I had walked into a meeting of a Sinn Fein cumann.  But then Feile an Phobail is very much a wholly-owned subsidiary of Sinn Fein.
Posted by Nelson McCausland MLA at 11:35