After the reopening of the Ulster Museum and Belfast City Hall I noticed that both have a multiligual welcome for visitors and it includes the Ulster-Scots term 'fair fa ye', which can be used as a greeting or a welcome.
For people who are not familiar with Scots or Ulster-Scots, it might be helpful to provide some examples of earlier usage of the term.  Probably the best known is that of Robert Burns in his address To a Haggis.  As the speaker welcomes the haggis he addresses it with the words 'Fair fa' your honest sonsie face.'
That poem was written in 1785 but some fifty years before that an Ulster-Scots poet, William Starrett of Strabane, said 'Fair fa' ye then' when he wrote to his friend Allan Ramsey, the famous Scottish poet.

James Orr of Ballycarry, the best of the 'weaver poets' and himself a United Irishman, had the women of the village welcome home the returning rebels in 1798 with the words, 'Guid God! Is't you?  Fair fa' ye.'

The term was also used by another Ulster-Scots poet, but this time from county Down, Robert Huddleston of Moneyreagh.  In 1844 he wrote a satirical poem about the Presbyterian theological controversies of the time and in it he had one of the characters  say 'Fair fa' ye auld Cloots!'  (Greetings Satan!)
The use of 'fair fa ye' by three of the Ulster-Scots poets confirms it as an authentic Ulster-Scots term and shows that it was used in the three core Ulster-Scots speaking areas of Down, Antrim and the Laggan. 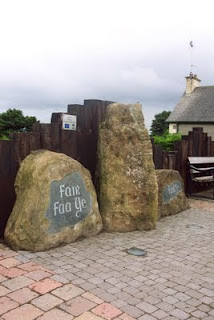 More recently the term was used by Ards Borough Council on welcome signs and it also appears on a trilingual welcome sign which was erected some years ago outside in the village of Dunloy, along with the Irish 'failte' and the English 'welcome'.  James Fenton, author of The Hamely Tongue, referred to this in his poem Dunloy, which appears in his volume Thonner an Thon, and he read the poem at the unveiling of the stones.

Fair fa ye is an old Ulster-Scots greeting or welcome and it is good to see it in use today.
Posted by Nelson McCausland MLA at 06:03