Shall we gather at the river? 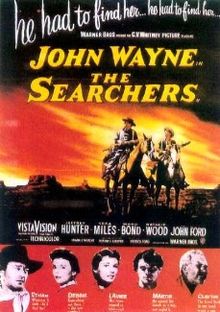 This afternoon I watched The Searchers, an American western film made in 1956 by John Ford.  It was based on a 1954 novel by Alan Le May and was set during the Texas-Indian Wars, a series of conflicts between the settlers in Texas and the Southern Plains Indians which lasted from 1820 to 1875.
The film starts in 1868 with Ethan Edwards, played by John Wayne, returning from the Civil War and extends over a period of several years.
Early in the film there was a funeral scene in which the mourners sang the hymn Shall we gather at the river?  The hymn was sung again later in the film during a wedding.
I wondered if this was an anachronism but in fact the hymn was written in 1864 and first appeared in a hymnbook the following year, 1865, several years before the scenes depicted in the film.
The author of the hymn was Robert Lowry (1826-1899), a Baptist pastor who was born in Philadelphia., and he later recalled: 'One af­ter­noon in Ju­ly, 1864, when I was pas­tor at Han­son Place Bap­tist Church, Brook­lyn, the wea­ther was op­press­ive­ly hot, and I was ly­ing on a lounge in a state of phys­ic­al ex­haust­ion…My imag­in­a­tion be­gan to take it­self wings. Vi­sions of the fu­ture passed be­fore me with start­ling vi­vid­ness. The im­ag­ery of the apoc­a­lypse took the form of a ta­bleau. Bright­est of all were the throne, the heav­en­ly ri­ver, and the ga­ther­ing of the saints…I be­gan to won­der why the hymn writ­ers had said so much about the “riv­er of death” and so lit­tle about the “pure wa­ter of life, clear as crys­tal, pro­ceed­ing out of the throne of God and the Lamb.” As I mused, the words be­gan to con­struct them­selves. They came first as a quest­ion of Christ­ian in­quiry, “Shall we ga­ther?” Then they broke in chor­us, “Yes, we’ll ga­ther.” On this quest­ion and an­swer the hymn de­vel­oped it­self. The mu­sic came with the hymn.'

Lowry wrote around five hundred gospel hymns including such great hymns as Low in the grave He lay and Nothing but the blood.
Yet he once wrote, 'Music, with me has been a side issue... I would rather preach a gospel sermon to an appreciative audience than write a hymn. I have always looked upon myself as a preacher and felt a sort of depreciation when I began to be known more as a composer.'  However it is as a hymnwriter that he is remembered and he wrote several of the most popular hymns of all time.
The hymns written by these great hymnwriters are an important aspect of Ulster-Scots culture and particularly the culture of the Ulster-Scots diaspora.
Lowry was a Scotch-Irish American and the son of an Ulster-Scot from county Down.  He was one of a number of Scotch-Irish hymnwriters who made a major contribution to gospel hymnody.

Shall we gather at the river,
Where bright angel feet have trod,
With its crystal tide forever
Flowing by the throne of God?
Refrain
Yes, we’ll gather at the river,
The beautiful, the beautiful river;
Gather with the saints at the river
That flows by the throne of God.
On the margin of the river,
Washing up its silver spray,
We will talk and worship ever,
All the happy golden day.
Refrain
Ere we reach the shining river,
Lay we every burden down;
Grace our spirits will deliver,
And provide a robe and crown.
Refrain
At the smiling of the river,
Mirror of the Savior’s face,
Saints, whom death will never sever,
Lift their songs of saving grace.
Refrain
Soon we’ll reach the silver river,
Soon our pilgrimage will cease;
Soon our happy hearts will quiver
With the melody of peace.
Refrain
Posted by Nelson McCausland MLA at 08:24